When I met a boy

Soon after, my conscience kicked in and I felt bad.  I made the extra effort to be his friend and realized the music he listened to was way more interesting than the music my friends listened to.

We started writing letters to each other in class, crumpling them up and throwing them across the back of the classroom where our desks were.

And they went back and forth every single day.  Hundreds of them when the teacher wasn’t looking

Pretty soon, at thirteen, we fell in love.

At least, as far as we knew what love meant.

To us it meant:

We began to have our lunches separate from all our classmates and friends.

and we entered int our own world…

1) I discovered the Beatles.

I remember riding in the back seat of my grandpa’s car in Paris with my brothers who always irked me, and it was as if they couldn’t bother me.

After the Beatles fanaticism ensued I longed to visit London or Liverpool.  I didn’t make it there but somehow I convinced my parents to let me fly to meet my classroom pen pal.  You know, the one with whom I had the collection of notes.  He was visiting in Italy with his family while we were in France.

Instead of our notes reaching each other from one point to another it was me!

I had never had a boyfriend before.  Well, that’s not entirely true if you count the boy I kissed at the bowling alley, but I wanted to forget about that.  For the most part.

In Italy the young kids all hung out together on the beach drinking until the sun rose, and we stumbled longingly from one end of the beach to the other, pulling a wooden boat into the water and floating along the shoreline, bobbing up and down like little ducks.

We walked along the seashore trying to catch the light as it shone on the surface, wanting it to stop so we could walk up the pathway of sunlight like a bridge.

The cave was the place where the older kids would hang out and play music.  The one with the guitar sang Simon & Garfunkel and Neil Young.  I heard some of the most influential voices of my life.

Hearing Paul Simon I felt like everything was right in the world.  I had discovered what poetry was and everything felt like it was in its place.  Right there in that cave, listening to the one with the guitar strumming away, singing his pretty song with his hair falling into his eyes (I know, but it’s true, it was!)

In retrospect, music has been a huge part of my life.  The summer I decided to move to San Francisco I was there with friends following the Phish tour.

The night I met my One Love we danced to bossa nova jazz in a dark club in the Haight.

Bringing in my fifteenth year, I was seated in the seventh row of the Paul Simon show at the Wiltern.

Ringing in my twenty sixth year, I was with my husband in the Berkeley Amphitheater to see Paul Simon perform.  There was an earth quake that night and it was Mr. Simon’s birthday.

If I drew a map of all the places music has taken me in my life, it would look like two chaos balls linked together by a very thin string, with sounds reverberating off of it.

A music history of myself:

Age 6- remember sitting in back seat of babysitter’s car with older brother in front seat.  She played “Under the Bridge Downtown,” by the Red Hot Chili Peppers.  She told us to remember the moment because it was a very important song.  I was moved.

Age 7- Received first CDs, Billboard chart toppers from the 50s.  Fell in love with idea of going to prom in a pink fluffy dress, asked mom to purchase me kitty cat shaped sunglasses and asked grandma to please buy me pink bicycle with white banana seat.  Listened to oldies love songs before bed and cried dreaming of finding my true love.

Age 10- started paying attention to some of the music my older brother listened to: Smashing Pumpkins, the Cranberries.

Age 13- the Beatles, Rolling Stones, Simon & Garfunkel, CSNY, Pink Floyd…  Picked up a guitar and realized I could sing and pluck strings too and it made me happy

Me: a sensitive, hopeless romantic, one who believes in superstitions like I am supposed to hear the songs that come on the radio while I am driving.  One who likes to observe others and the world go by while listening to songs play, one who imagines movie scenes an screenplays based on songs, one who writes the perfect scene to go with different songs.  One who remembers lyrics, one who listens to lyrics, one who prefers listening to music while at home reading into the darkness of the night.

And writing while listening to music, which I am doing right now….”Suzanne….”

In remembrance of the good old times driving down Sunset Blvd with the boys and their long curly hair, sitting in the back seat of the old Mercedes, too stunned to believe I had never heard of the good girls being bad or “Hey Hey What Can I Do,” blowing cigarette smoke out the window as it wound up the canyon, Home.

The path to wellness starts in the present moment. We practice yoga to come into our bodies and to free the mind from suffering. Then we can find inner peace ☮ #yoga #california #love #meditation #now #calm #relaxation #wellness #justbe #inthepresent #peace #healing #yogaspiration #yogimom

Setting the Table & Dimming the Lights

How to host gatherings that encourage good conversation and being present in the moment, connecting guests with nature through food

It’s easier and more fun than you think!

These will determine the appropriate:

Once you gather the facts and get to know your audience, as well as the expectations of your host, the fun part begins!

No matter what the occasion– pizza party, cocktail party, holiday party– here are the staples and the things to consider when making your choices:

Some tenants to live by:

Make things– it’s more personal, fun, and your guests will appreciate it!

Use edibles– for as much of the table decorations and flower accompaniments as you can.  This will ensure that the items in arm’s reach of your guests hands, mouths and plates are safe to eat if ingested accidentally or on purpose.  Plus, the aroma of mint leaves mixed in with your roses will surely delight and surprise your guests.  You can use the mint in one of your dishes or desserts to enhance the affects of this nice gesture. 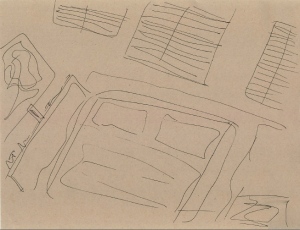 This is the bed on the floor in the room with the pencil drawing of the broken hearted Ferdinand the Bull hanging on the wall, crooked, where I fell in love.

This is the room with collected objects and photographs on the desk, the bed unmade, and the mattress on the floor.

This room belongs to the skinny boy with the soft messy hair under the straw hat with the blue sash who rides his bike around the city and wears thin t shirts and paints.  Who furrows his brow, his almond eyes and long lashes look at you as you sip a cup of tea in the warm light of his living room, the girls at Tartine waving from the sidewalk below.

The girls at Tartine wait to see if he would like a cappuccino or a croissant as he waves down to them from the bay window in the third floor flat.  He shuts the door to the window and the draft carries down the hall into the bedroom where the drawing of Ferdinand the Bull awakens and lifts from the wall.

The Bull.  Wounded with an arrow in his side, nose and eyes turned down to his hoof, the sparkle in his eye dim, but always with enough light to let the prospect of love in.

We were two broken hearts.  So we laid in bed together until we unwounded each other’s hearts and formed a somewhat mended and manageable heart.

Every late night spent together talking, laughing, smoking.  On the town, on the roof, in the bed.

People said, “Slow down, take your time.  Wait first before you jump in.”

I thought, “Every idiot can take their time and miss out on life’s greatest opportunities on Love, but not me, babe!”

so you can smell the flowers and make decisions.

Sometimes you have to trust yourself.  Even if you can only draw stick figurines to express your emotions:

on literature and memory…

“In at least one sense, however, all literature is civic action—because it is memory. All literature preserves something that otherwise would die away with the flesh and bones of the writer. Reading is reclaiming the right to this human immortality, because the memory of writing is all-encompassing and limitless. Individually, humans can remember little: even extraordinary feats of memory such as that of Cyrus the Great, king of the Persians, who could call every soldier in his armies by name, are nothing compared to the volumes that fill bookstores. Our books are accounts of our histories, of our epiphanies and our atrocities. In that sense all literature is testimonial. But among the testimonies are reflections on those epiphanies and atrocities, words that offer the epiphanies for others to share, and words that surround and denounce the atrocities so that they are not allowed to take place in silence. They are reminders of better things, of hope and consolation and compassion, and hold the implication that of these, too, we are all of us capable. Not all of these we achieve, and none of these we achieve all the time. But literature reminds us that they are there, these human qualities, following our horrors as certainly as birth succeeds death. They too define us.”

Power to the Reader

Very proud that my first piece has been published by Arizona State University’s literary magazine, Canyon Voices.  Please click on the link below to be directed to my submission, “Indian Summer.

*Please note that the work is in the genre of creative nonfiction despite its categorization in fiction by the magazine (small detail).  Also, there should be a page break between the scene ending with the Brazilian songstress and the scene opening with the young man and the dog.

Thank you and happy reading!

“Nonfiction writers do not make things up; they make ideas and information that already exist more interesting and, often, more accessible.” –Lee Gutkind